Griddles vs grills – these cooking terms might be confusing for the newbies, you will hear these things while cooking in any kitchen, and what do they actually mean? Well, these are two different types of kitchen stuff as well as very important cooking equipment to the chefs.

In a word, grills have distinctively raised ridges which leave “grill marks” on every single food you cook and griddles are totally flat. But we have covered more than this in the article. We have asked questions to its users and revealed why they use most of the time and the common question as well. And at the end of this article, you will discover which one is better: grill vs griddle?

What Is A Griddle?

Let’s make it super obvious and answer the question first: what is exactly a griddle?

Basically, a griddle is flat made of either cast iron or stainless steel. Moreover, it has a large, flat cooking surface and generally, comes in a rectangular shape. The griddle is heated from below which heats the surface and the heat cooks the food through its own juice or the oil it has on the top of the griddle.

However, there are lots of varieties of shapes and sizes in griddles. And the most common shape you will see in the restaurants. Sometimes it’s called a hot plate rather than a griddle. And you will notice that burgers, sandwiches and other delicious goodies are being fried up on a griddle in every restaurant.

Again, outdoor cookers or BBQs might contain a griddle plate that can be attached, but the goal remains the same. The gas or coal flames heat up the griddle from below and the griddle cooks the food as you wish.

Griddle pans are another wonderful creation to make cooking easier and more delicious in your home kitchen. And this tiny kitchen equipment can be a great alternative to the large hotplates you see in amazing restaurants. And you will be able to cook similar delicious burgers in your own beloved kitchen with much comfort. And best of all, griddles can be heated directly through gas or electricity and you can easily use it on your regular stovetop as well.

What Is A Grill?

Basically, there are two types of grills you will find in the market. One is a steel plate or solid iron with ridges and the other is bars that basically hold the food over the flame. Most barbeque grills are generally the open type of grills.

A grill has distinctively raised ridges on the surface which basically leaves the grill marks on anything you cook. The ridges transfer the heat into the food while allowing the grease and oil to run through the gap.

Moreover, the grill cooked food contains tasty, little grill marks through the raised ridges or bars. The food turns brown or almost black – where the food contacts the raised metals. The grill marks are called the Maillard reaction, it happens when the sugar caramelized from the heat.

Grills are only used underneath a commercial ventilation system or outdoors which release the smoke outside. Basically, grills give off a lot of heat and smoke which is the reason it requires more heat to cook food compared to the griddle.

What’s The Difference Between A Griddle And Grill?

The difference is clearly visible that grills have distinctively raised ridges if the grill is a solid plate. Griddles have plain and smooth surfaces. Both the grills and griddles can be used over gas, electricity, or charcoal.

While cooking with the griddles – the heat source or flames never touch the food. Basically, the entire surface of the griddle becomes so hot and thus, the hot surface transfer the heat to the food helps in cooking and browning the food evenly.

Griddle requires fewer temperatures than grills. While grilling, the source of the heat or flame touches the food directly as well as through the metal of the grill grate. The metal becomes hotter and hotter, intensifies the heat, and leave brown marks on the food at the point of contact. And these grill marks we see on the food and love to heat them like steaks and hot dogs.

Simply think about a pancake that how you make it. If you pour batter onto the surface and you see round flat pancakes – then it’s obviously a griddle. And if it’s a metal plate that contains raised ridges or there are bars with openings in between – there is no doubt that it’s a grill.

Griddles are made of either cast iron or steel. If you are going to use it for commercial purposes or planning to use it roughly and also have a big budget for your griddle – then you can go with stainless steel and even chrome.

In most of the restaurants and hotels, you will find stainless-steel or steel griddles. Chefs mill their steel smooth to about ¾ inch which weighs around 30 pounds / square foot. This metal has excellent heat retention and recovery. Even it won’t wrap as well.

What Are The Right Cooking Temperatures?

Well, this is one of the biggest differences between a grill and a griddle in their cooking temperatures. Basically, grills require to have temperatures of a minimum of 400°F (204°C) or more. Griddles can be done its job around 350°F (177°C).

Grills belong under a commercial hood ventilation system or outside as they produce more smoke and heat.

Griddles seem a little safer as the food is not in direct contact with the flames and there is no chance of a flare-up. 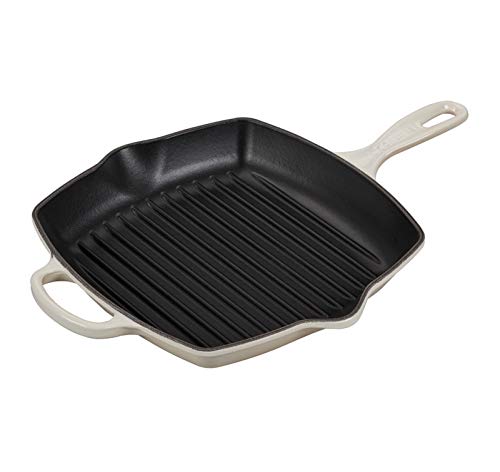 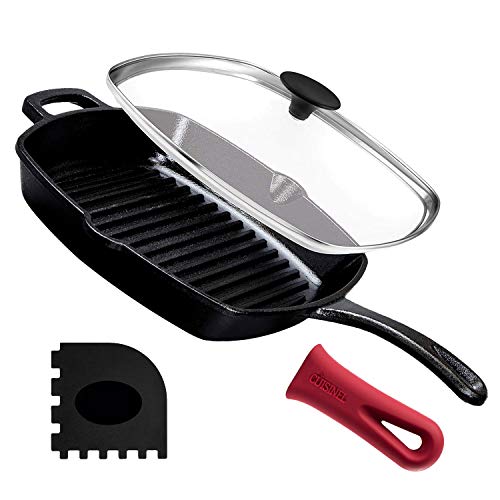 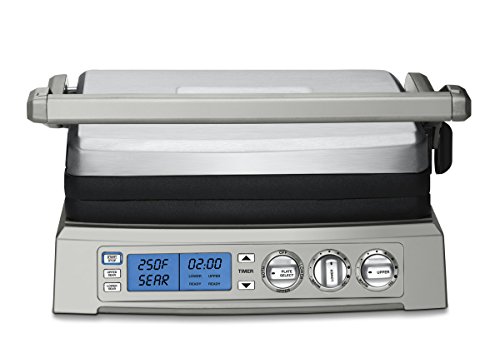 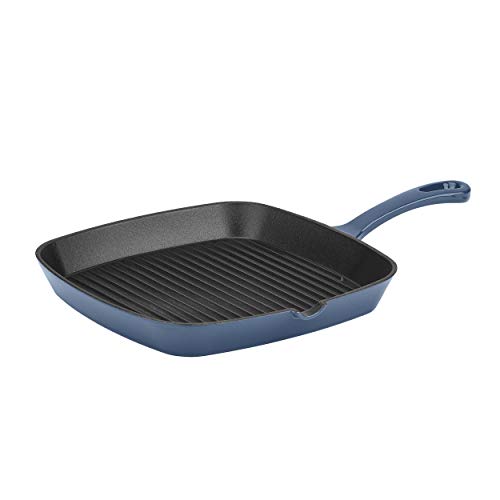